The advent of digital technology has not only transformed the political, social, and economic landscapes but has also introduced a wide array of solutions to human problems and alternatives to traditional approaches. Issues, from the mundane to the most critical, are now being addressed with a couple of swipes on people’s smartphones. Most impressive of all is the ability of today’s industries to meet the needs of people from all walks of life, thanks to digital technology.

Safewave, the company credited for the world’s first and only smart notification wristband, harnessed the power of modern tech to bring considerable value to the table – one that benefits the Deaf and HoH community.

A Black-owned venture, Safewave Technology currently operates under the overarching mission to give individuals who are deaf the opportunity to protect their loved ones, families and their homes through a vibration-based wristband that links to mainstream security systems and fire alarms. Its all-out efforts sprouted from a seedling of an idea by Trevon Bruch, whose experience with fire alarms lit a light bulb in his head. 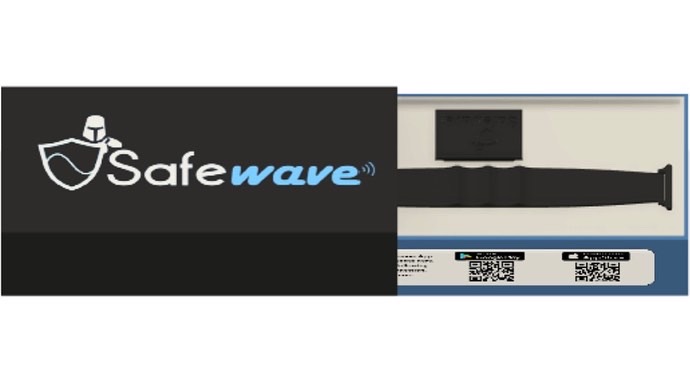 Woken from sleep by a faulty fire alarm, Trevon checked his surroundings, only to realize there was no threat. Nonetheless, it made him wonder, “What if I did not hear the alarm and something was seriously wrong?” he thought. Armed with this question in mind, he discussed the idea with Jared Gabbard, a fellow go-getter who would eventually emerge as the co-founder of Safewave Technology, and asked him to search for devices that help alert deaf individuals and those hard of hearing when there’s an emergency. With surprise, Jared found a gap in the market.

A couple of years down the road, Trevon and Jared now stand at the helm of Safewave Technology Corporation, boasting a patent-pending wristband that aims to serve a community often overlooked.

“At Safewave, we are not looking to reinvent the wheel,” shared the team behind the purpose-driven venture. “Instead, we are pushing to add improvements to the home security industry and cater to the 466 million individuals that our competitors overlooked.”

Small it may be, but the Safewave band promises significant utility. It is equipped with technology that monitors smart security system warnings and communicates the notification to the smart wristband. “This small feature has a big impact and satisfies the need for safety of a population that was previously overlooked,” the company added.

Apart from a band that can receive all smart notifications, such as security alerts, alarms, text messages, and calls, the veteran-owned enterprise also offers an app designed for simplicity. User-friendly, the application connects to the Safewave band and maximizes its potential to ensure safety and reliability.

Right now, Safewave Technology is raising a $750,000 round to launch the band by January 2023. In the past five months, its highly dedicated team has already raised $60,000 due to the massive appeal of the band. Given the value it promises to deliver, it would not be a surprise if it hits the market much sooner.

Opinions expressed by US Reporter contributors are their own.
Share this
Tags:

Valentina Ferrer on TikTok, Entrepreneurship and the Beauty of Life Without Limits

The world as we know it is drastically changing. And amidst all the uncertainty and evolution, those have adapted to the times

Women are Rejoining the Labor Market, Experts say Inflation is a Main Driver

Businesses have stopped as a result of the pandemic, and several people have been left unemployed. While the authorities rigidly enforced the

The government of the United Kingdom decided to implement its strategy to combat inflation due to inflationary pressures. However, the International Monetary